Colin Ambulance’s pen name seamlessly fits the art he creates. His art is funny and dark, face-value amusing and topically satirical. Colin is prolific. He uses pens and oils and word balloons to depict an apocalyptic (or realistic, depending on the viewer) glimpse into hipster, scenester, alcoholic, druggy, poser, etc., Los Angeles culture.

His use of contrasting mediums and line-work give his art a quality that bridges “fine art” and “comic illustration”. Those terms are insufficient in themselves, so let me expand. Colin’s technique is varied and purposeful. He knows the human form, and he uses pen, pencil, and paints, to develop the protagonists/antagonists/foils he presents. What he constructs is also quite referential and exaggerated: a stripper dances in front of a crowd who doesn’t know that there are giant cockroaches behind them.

Colin was born in Los Angeles and spent his early childhood bopping between West LA and Van Nuys. In second grade, he moved with his family to Camarillo, just up the 101 Freeway, where he spent the next seventeen years drawing the world around him and making copies on his grandpa’s office printer. Most recently, and for the past thirteen years, Colin has been arting and living in East LA: Echo Park, East Hollywood, Little Bangladesh, and Koreatown.

You can find what Colin Ambulance considers as his best paintings and illustrations at SPACEDUST (2153 W. Sunset Blvd. LA CA 90026) and his personal Facebook gallery, which he updates the most, and where he has made the most sales: Colin.Amulance on Facebook

Colin just finished a piece depicting two figures in a night club looking situation. One person is presumably a woman, revealing her lovely set of breasts as she takes off her white t-shirt. The other appears to be a young man snorting coke off of a mirror. Though the prominent images mystify or romanticize the scenario, their reflections on the coke-snorting counter reveal a less sexual and a more chaotic reality.

Scenarios that could initially both marginalize and reinforce white, hipster life are transformed into cultural commentary. Colin’s attention to detail and his emphasis on character, convey a disconcerting irony. He pushes what he depicts.

I chose art before I was old enough to make any conscious decisions of that caliber. As a very young kid, I had to “entertain myself” for good stretches of time. I’d draw and observe. Sometimes, I would spend eight hours with my grandfather during his shift at the Century Twenty-one realtors’ office on Venice. It was very still and severely drab watching the other agents quietly take their clients’ calls at their desks. I remember the air was so thick there, and the sunlight came through the main window in a way that caught dust particles in midair. I watched them hanging still in the air. The circulation was pretty terrible, I guess. When his shift was over, I would take my drawings from that day and go, with my grandpa, into the back of the building where they kept the copy machine. My grandfather would make enough copies of each drawing so that all of the other agents in his office could have their own “prints”. My gramps was the sweetest dude that ever lived.

This may be a less conventional answer to the question. I’m prone to dreadful tangent digressions.

There’s a lot of text in your work. Do you consider yourself a writer?

I am a writer, foremost, in that every piece I produce is its own idea. I often wish I could illustrate these ideas into sketch/scene format or an animated short, so I could expand beyond my one panel conceptual mise en scène. I create scenes a lot in my art, but they don’t communicate the full story. I’m not a great artist. I know that. I try to make up for my lack of fine artistry skills with an effort to create art that’s entertaining or unsettling, so you know there’s a point to me creating it. Some people can do photo-realistic portraiture in oils the same way some guitarists can shred every note of some late 80’s, seven minute long, Steve Vai instrumental virtuoso, wank-off, ditty with the accuracy of a true hard rock…virgin…wait..where was I? Oh yeah. I was relating fine artistry skills to super technical guitar shreddery skills. I have neither of these skills. (I don’t even want the second one.) I set out to make something that speaks personally to the viewer. I love hearing people say they that they really dig a certain painting/illustration because it means something to them that I hadn’t even thought of at all.

My point is: I’d rather make a low-brow piece that people connect with and enjoy, in the same way I appreciate a well written-song that spares me the obligatory razzle-dazzle guitar soloing.

Do you have a certain audience in mind when you’re making a piece?

Not…really. Maybe I should. A couple of years ago, I was asked to participate in a group art show in Echo Park. I wasn’t able to be there for opening night. Somehow, nine of the twenty-eight pieces that I had on the walls, managed to walk out the doors on their own. That’s a minor collection right there. Someone, or some people, liked my work so much they just had to steal it for themselves. Maybe i should appeal to a better demographic?

For more information bout Colin email him at colinambulance11@gmail.com 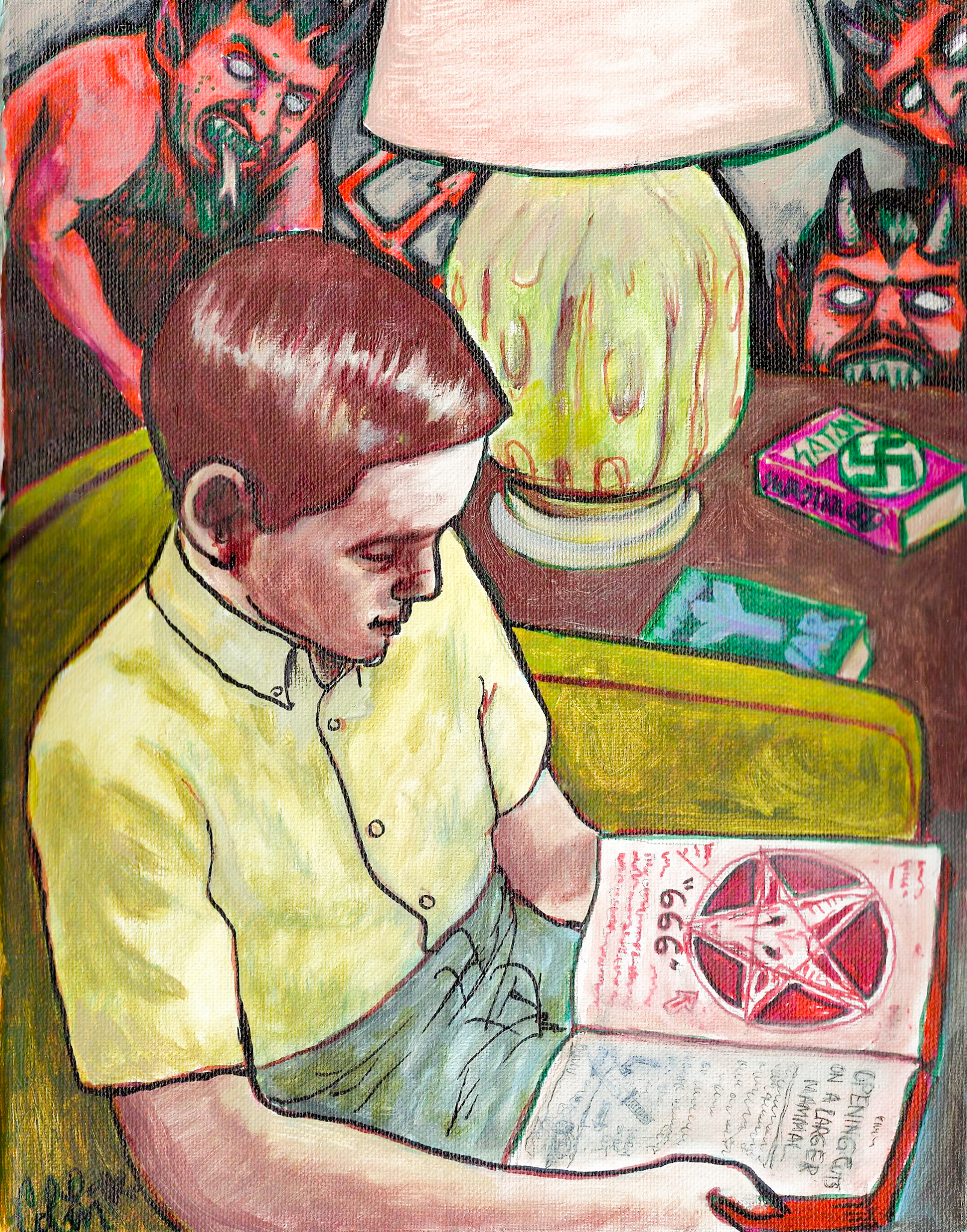 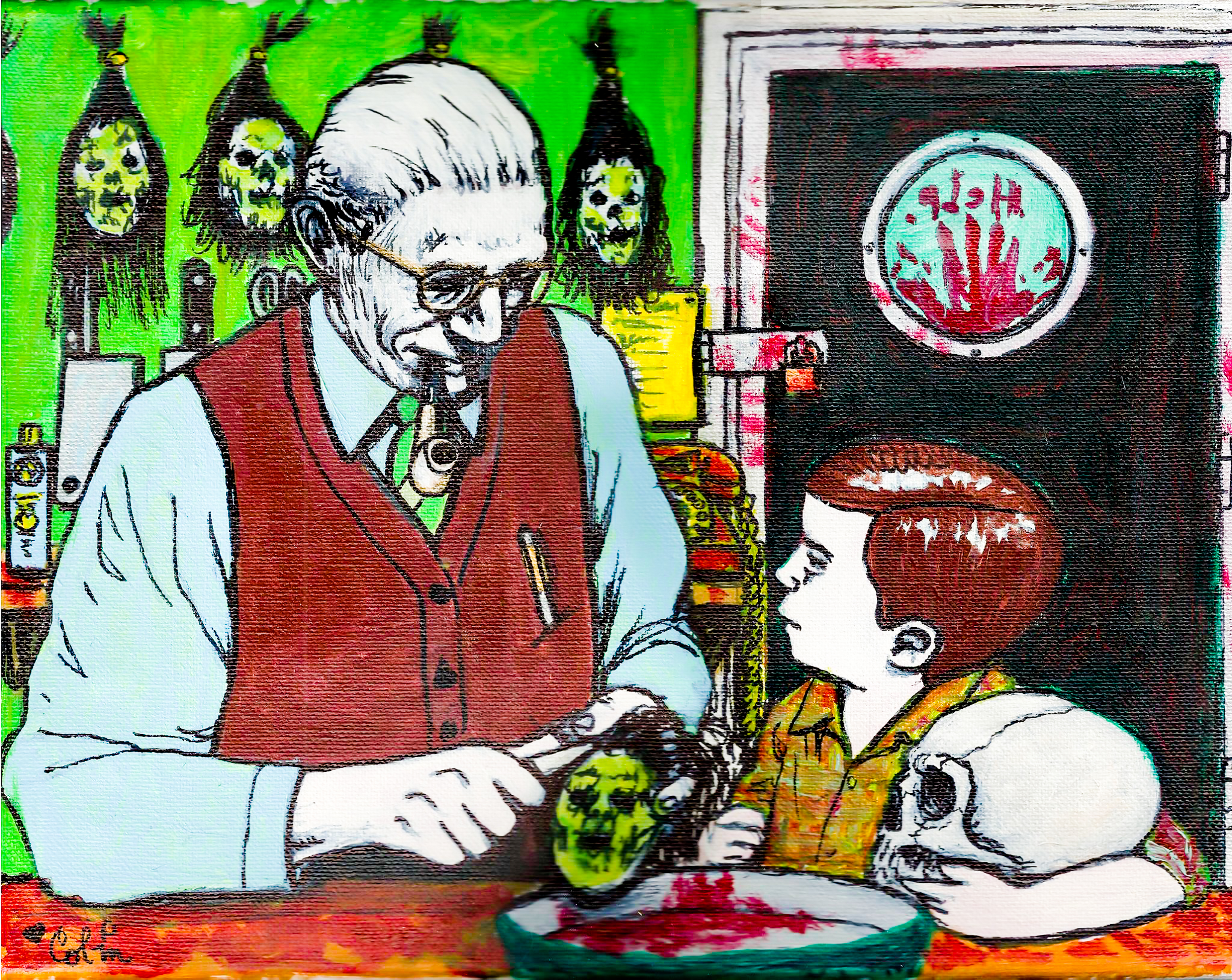 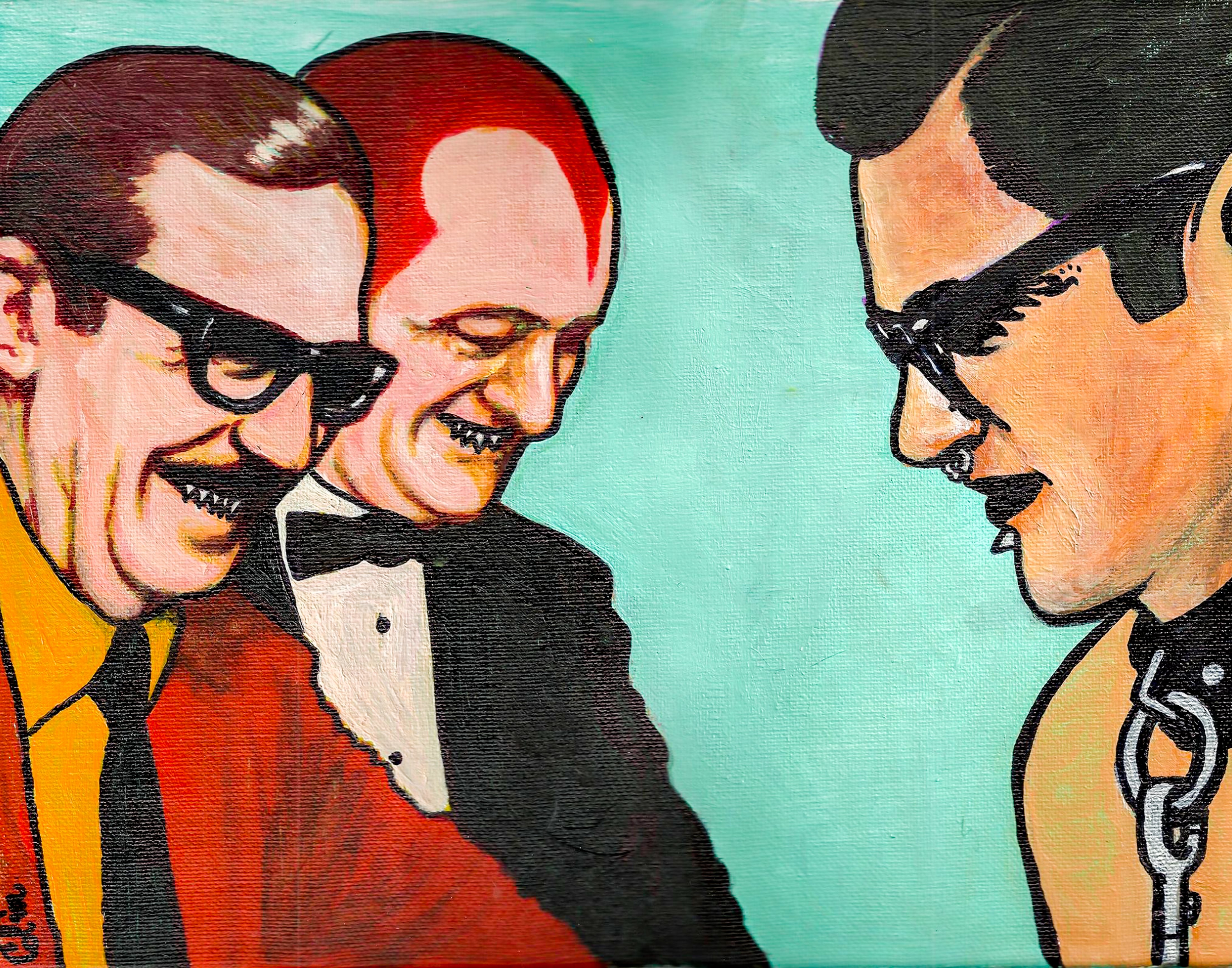 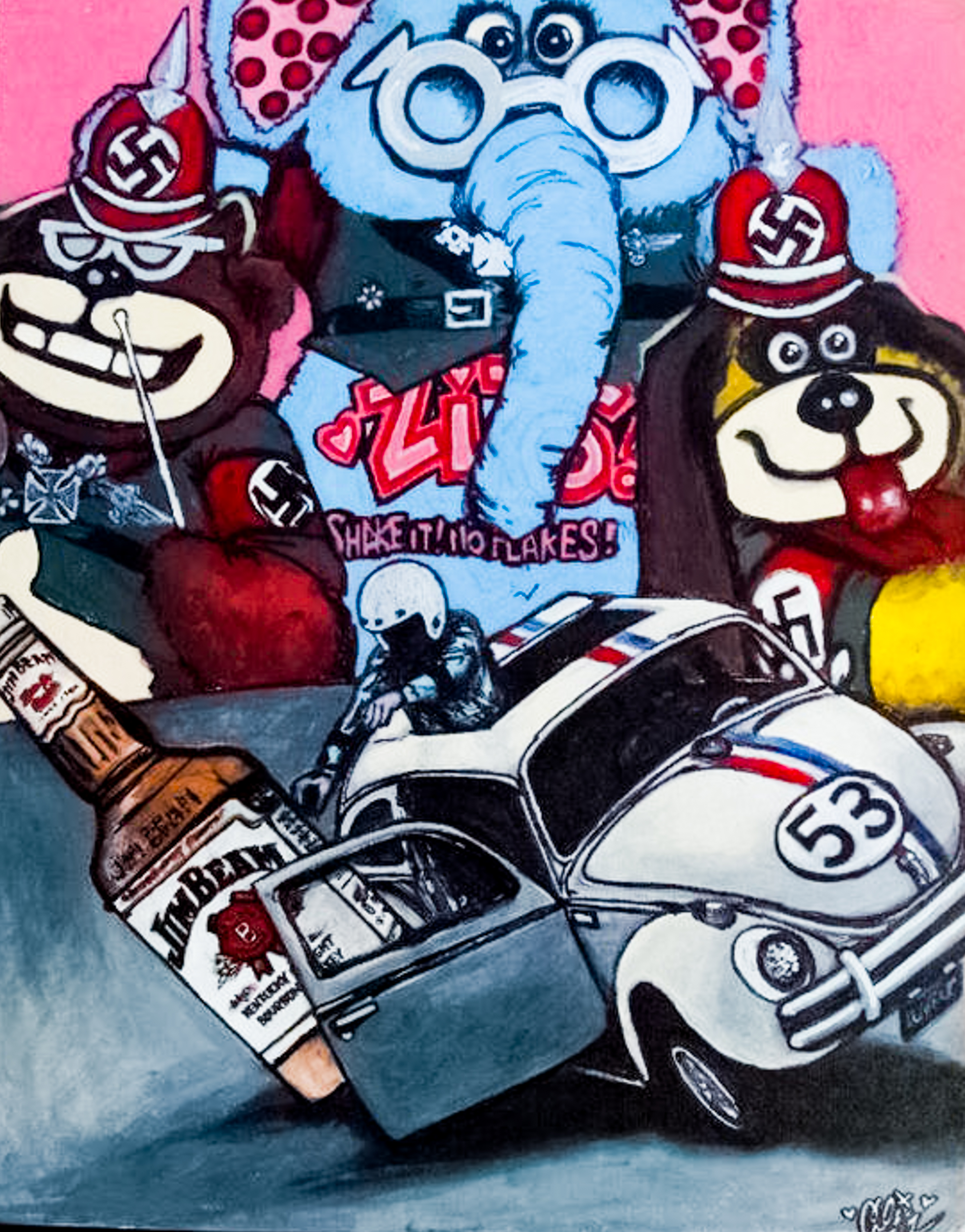 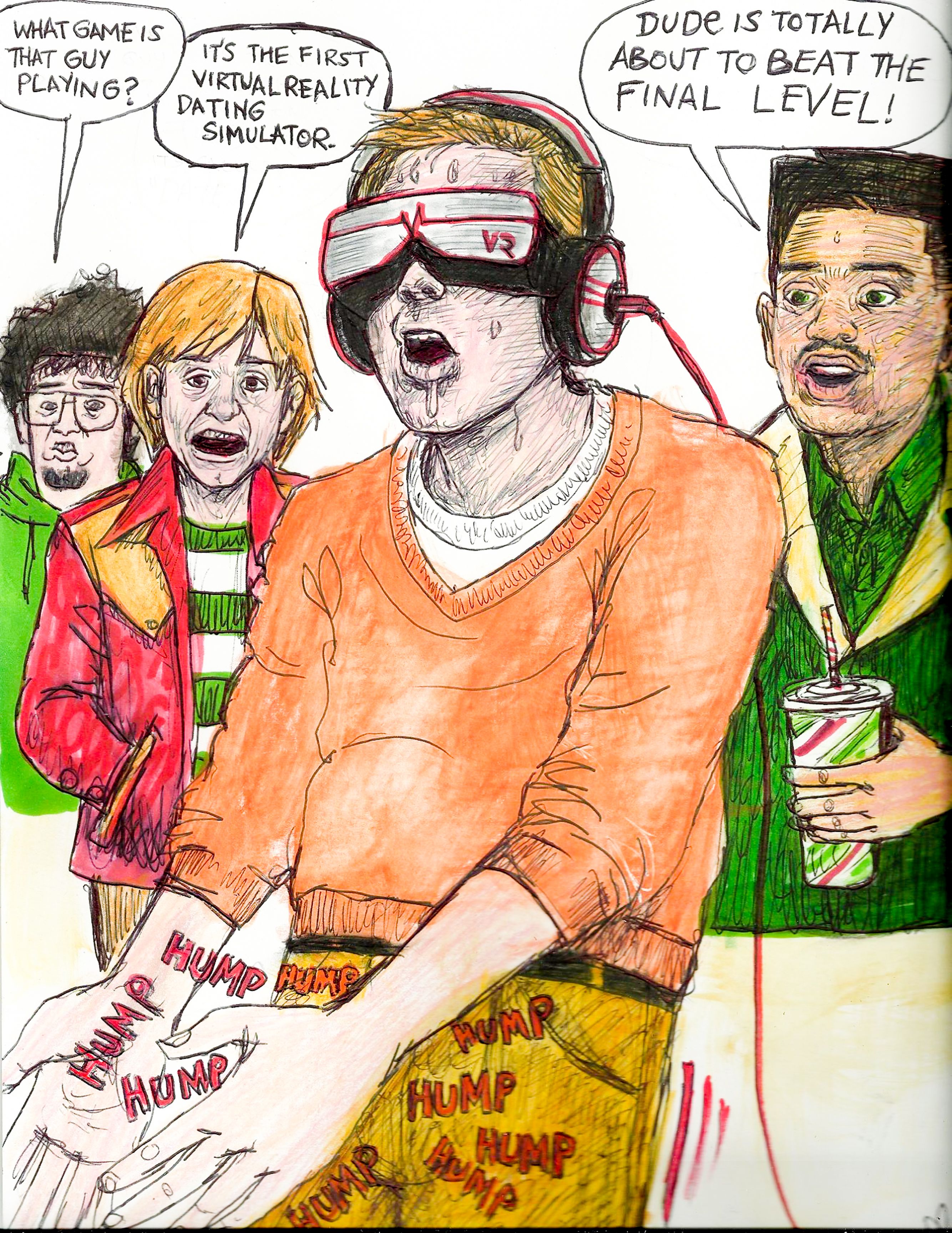 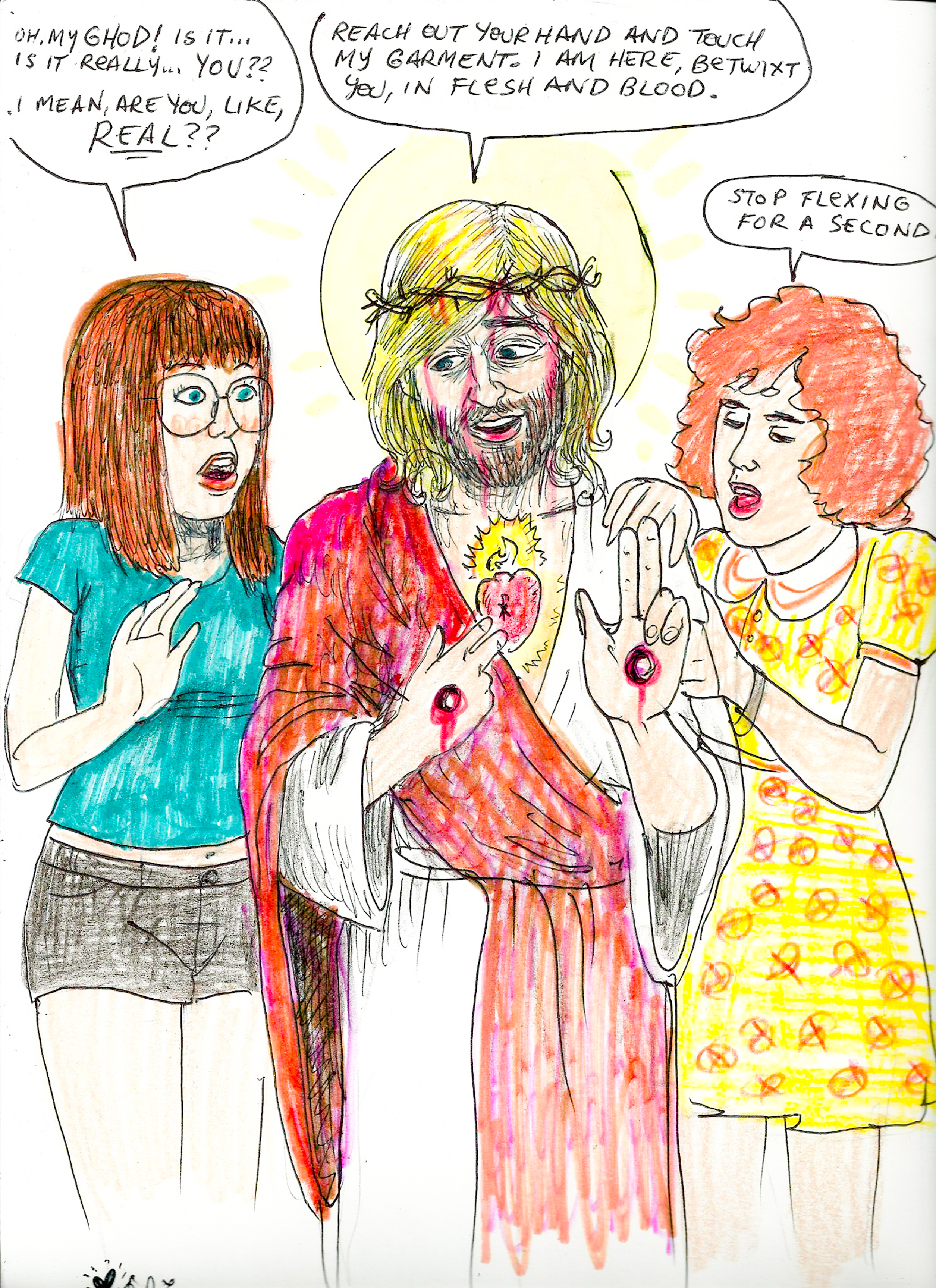 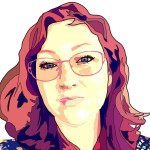