If you’ve read the We Choose Art L.A. Art Show Re-cap for 2016, you already know how we feel about Melanie Pullen. Her, along with a few standout female performance artists wowed the crowds (and us!) and stole the show last year… This year, Pullen was back to do it again! Her piece entitled “Violent Times” was a huge success at the 2017 L.A. Art Show and rightfully so! It was absolutely thought-provoking. Delicate, yet fierce. Beautiful, yet gory. Visually appealing, yet visually appalling. Overall, Pullen delivered big time and to tremendous crowds, over the course of the 5-day show.

We Choose Art touched based with Melanie Pullen and got an in-depth look at “Violent Times.” From conceptualization to the team effort it took to make her visions a reality, to show time, Pullen shares all below:

We Choose Art: I’m so intrigued with your work, your pieces are so captivating! Can you give me some insight into how “Violent Times” was conceptualized and brought to life? And a closer look into the bloody, gory, thought-provoking subject matter(s) that seem to drive your pieces?

Melanie Pullen: I conceptualized and created this performance piece from the ideas and emotions that I’ve been exploring for over two decades in my work. It was a sort of culmination of this energy.

For me, there has always been a lot of internalization hidden in the process of what I do and something I’m always touching upon is how society exploits women, sex and violence and I touch on these elements and try to break down aspects of this by using these social taboos in what I create. I mix emotions and put in things where they break through a social barrier or restriction.

One of the things I’ve always been interested in is blood and how powerful it is conceptually, as it represents death but in contrast, it represents the ultimate which is the power of life and living. I find it’s a strong subject matter and interesting to see the effects it has on an audience. With this performance, I wanted to explore both the ceremonial and raw facets of violence, inherent in both nature and the human condition. To do this I decided to engage the bareness of what you’re left with when you are in a situation of torture or total loss of physical power which is the overwhelming sound of your heart and breathing. I wanted the sound during the performance to be my own breathing and as the physical sound evolves with a heartbeat moving from a relaxed state into a peak of anxiety or terror, in the piece the performers also fluctuate between the concept of inflicted human torture to a peak of barbaric untamed aggression. The blood becomes animalistic and takes on its own life and asks the viewer to question its meaning and the effects that violence, both real and simulated, have in different cultures.

Pullen: To get this team together I pulled from my pool of creative friends that I admire and happen to hang out with, I kind of wrote up a story and presented it to my close friend Molly D’amour, who happens to be an amazing dancer who toured with Lady Gaga for years and a wide range of other vocal artists. I said I need to translate my idea into movement and so she worked with me to choreograph this idea. I wanted movement, but not “dancer movement” and she nailed it. She pulled some of her top girls and it just flowed… so it became this wonderful visualization of the concept. Drew Pluta did the sound in real time and again, we were just totally on the same page. I told him what I wanted and he nailed it. We recorded sounds and he knew it had to be in real-time so he made it live during the whole performance.

For me, my preparation had to do with a lot of driving around late at night to think. I would play different heart beats as I drove and certain ones would put me into an anxious state, this was helping me create the concept and leading me to understand the effect certain tones have physically on someone. I’ve always had a high sensitivity to certain tones, which helped me chose the most uncomfortable tones.

I also studied different methods of torture and decided I wanted to explore rope. So I worked with Master K and his assistant Remy to create Kinbaku “rope bondage” which is a sexual thing, yet in contrast, the rope is used in torture. So I found this contrast to be fascinating and the fact that rope bondage can be so artful and sculptural when done properly. Master K is known for this, and I worked with them for several days to create a concept for this which they brought to fruition. Ultimately the models being bound represented the total loss of power.

I also worked with my makeup team, who helped me going way back to the beginning of my Crime Scenes, Saul Gallegos and Cat Cordova and their team, to create a look close to death, a torn yet beautiful look, pale and white that would contrast the blood that takes over the performance.

WCA: And one last question is why do you choose art?

Pullen: Art is my lifeline, it’s something I don’t know that I could survive without as I’ve never known a life without it.

Melanie Pullen and her extraordinary team have delivered fantastic, show-stopping performances at The L.A. Art Show two years in a row. Us, here, at We Choose Art are absolutely riveted with the work we’ve seen and cannot wait to see what Melanie has in store for us in the future. See more of her work at MelaniePullen.com and stay up to date on her projects by following her Instagram @melaniepullen. 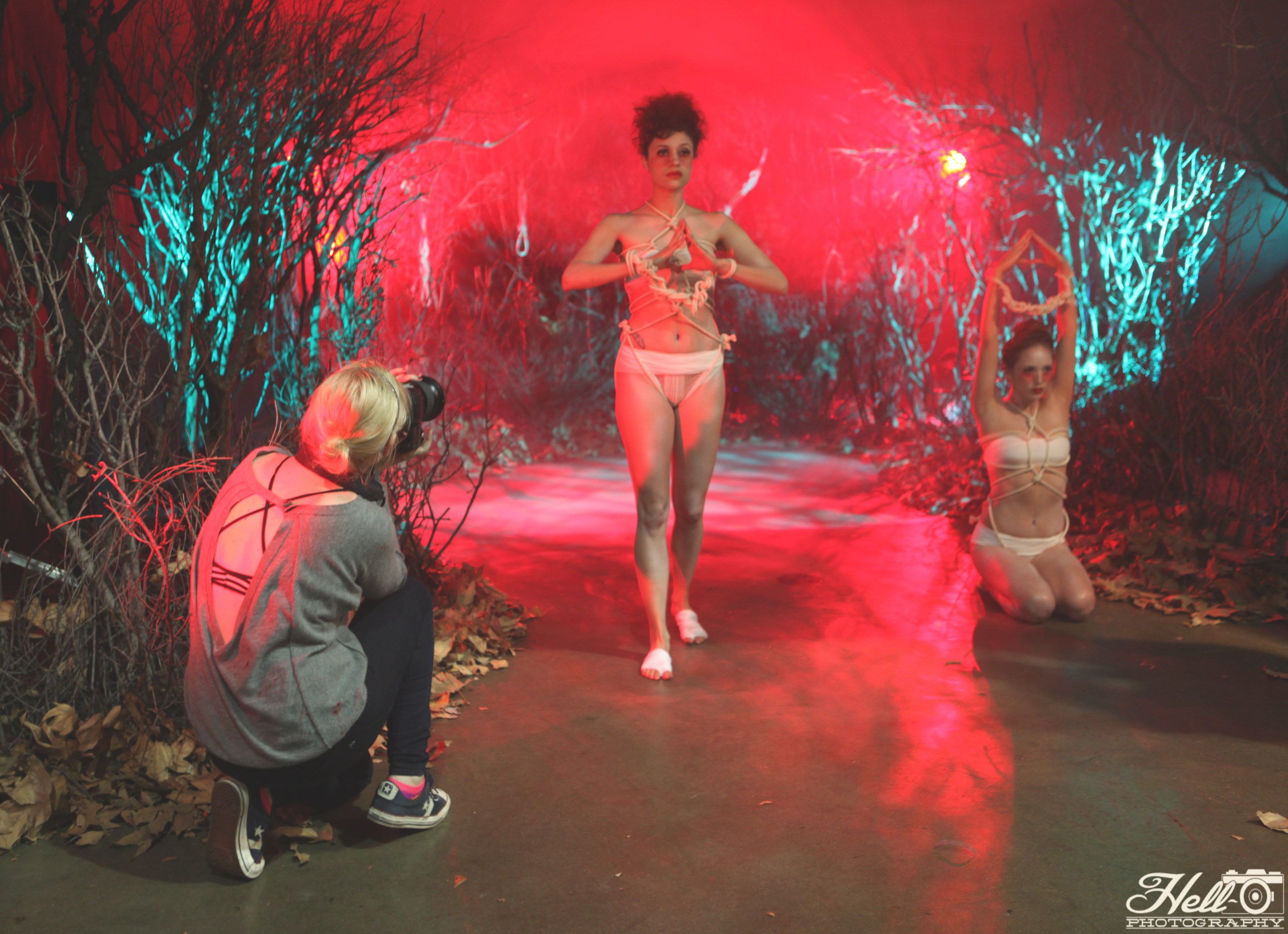 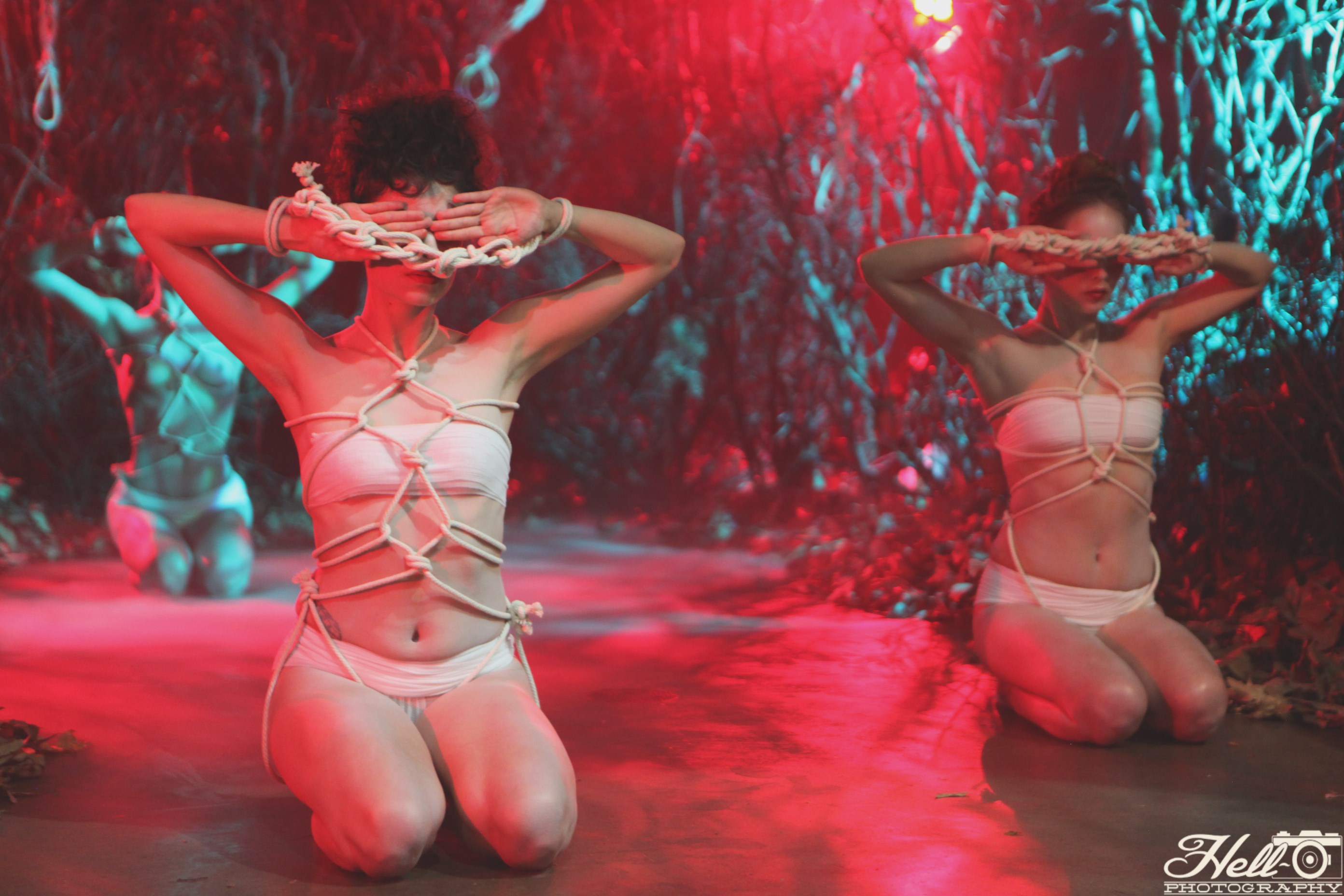 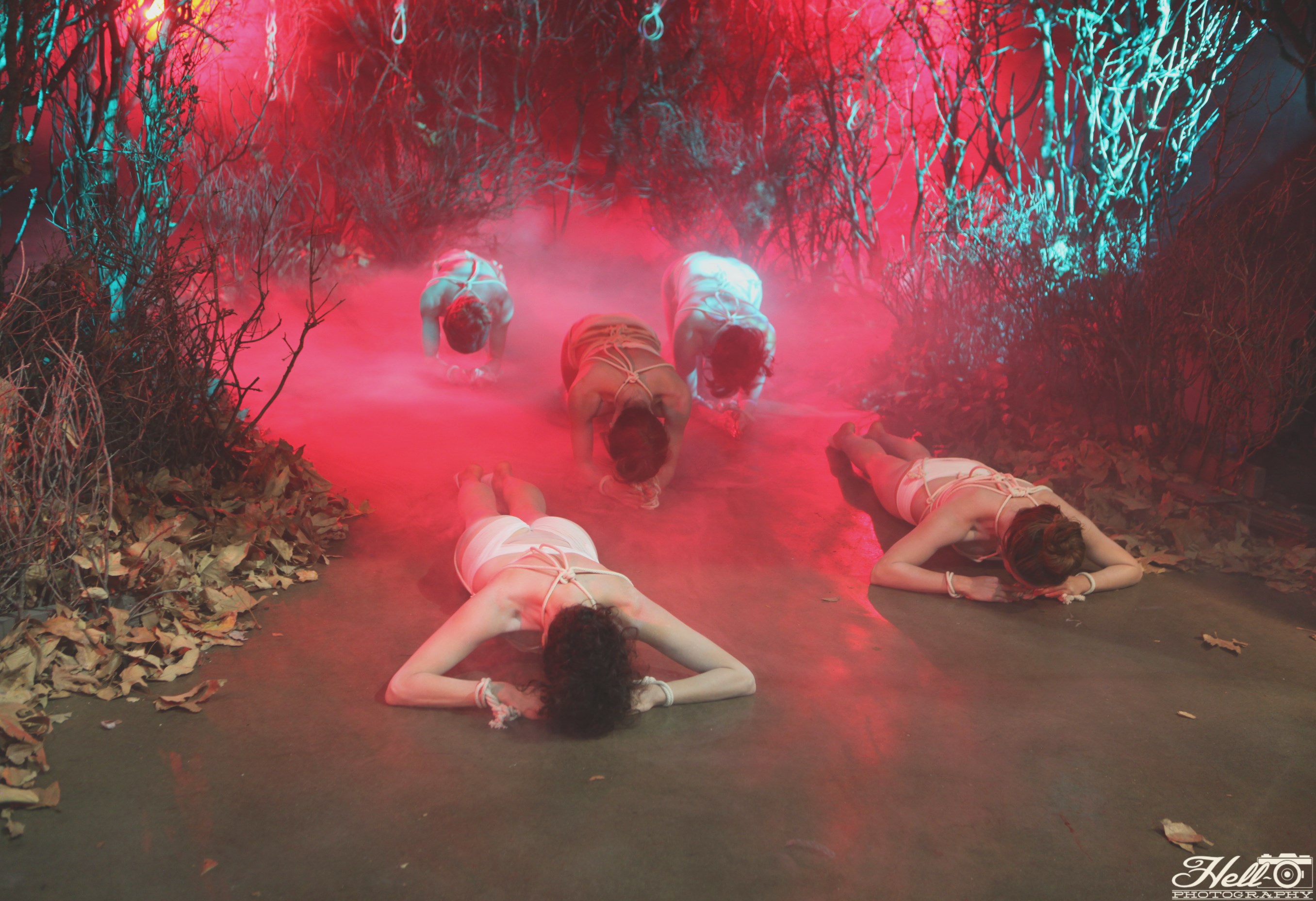 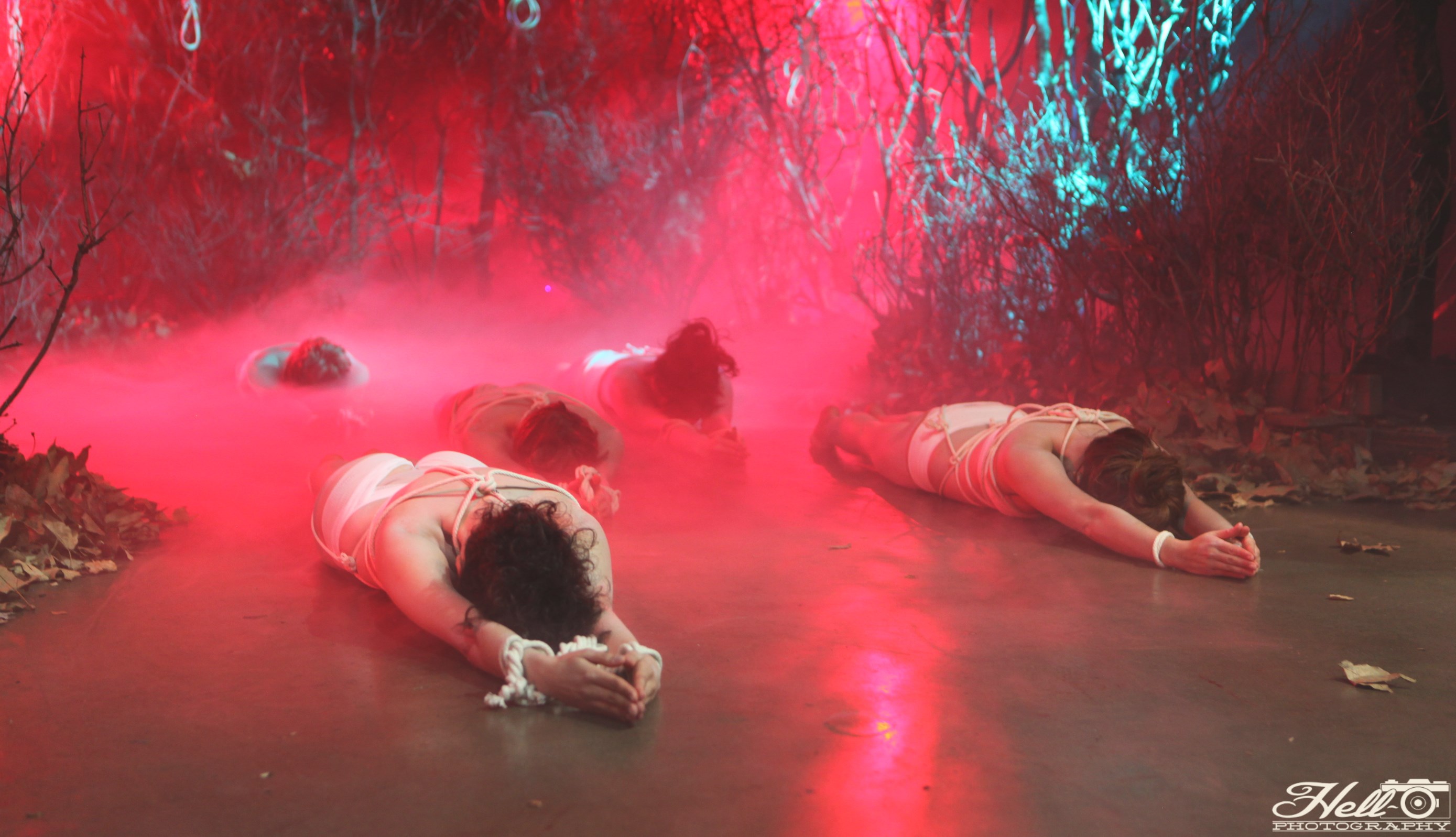 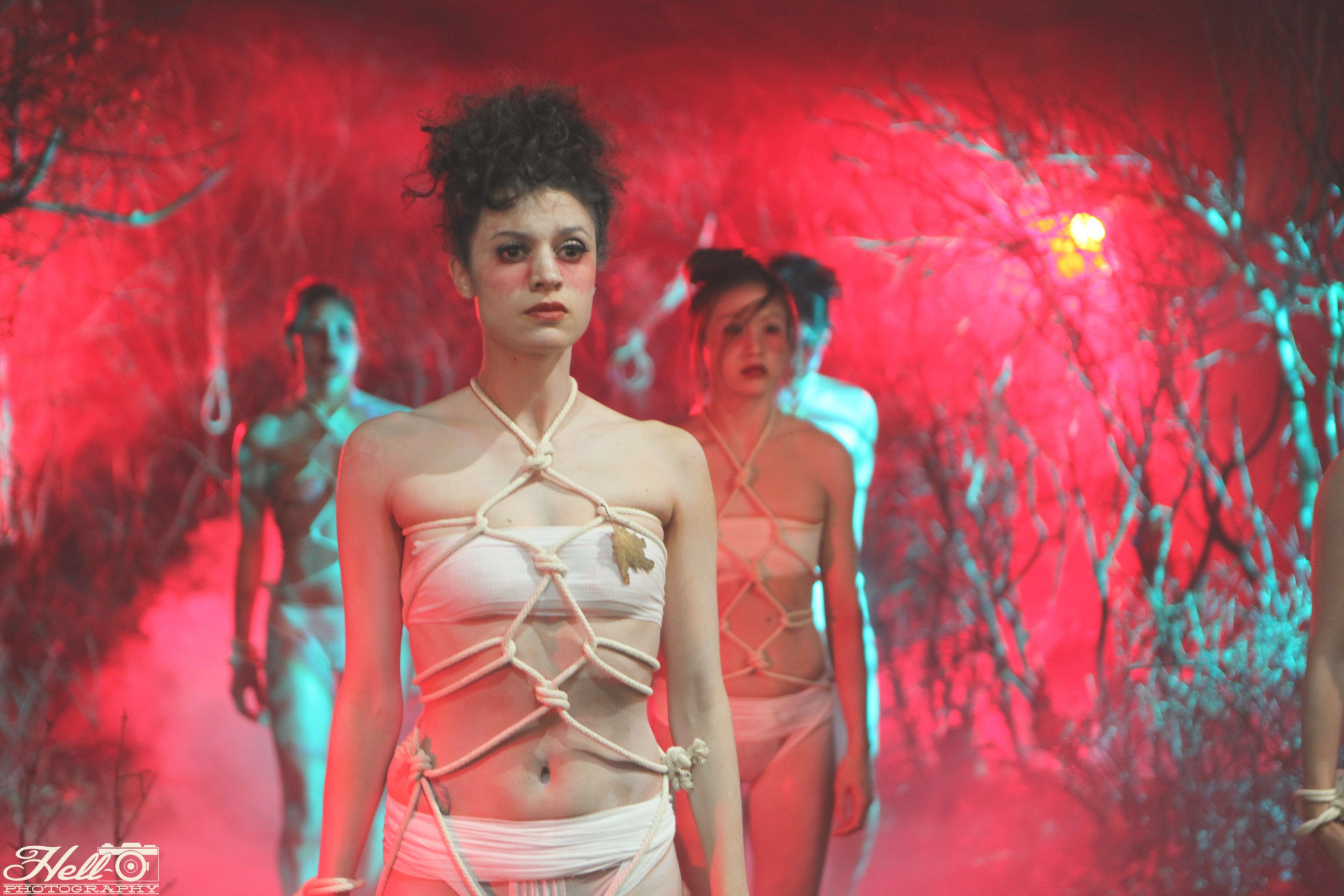