Eight years ago I walked into an Eagle Rock art gallery painted blue and gold and pink with art made from fiber, wood, canvas, paper, bone and metal sometimes all in one piece. The shelves held Mate tea gourds, tiny sculptures, handcrafted jewelry and custom-made cards. Amidst this were the works of Patricia Krebs. This was the Cactus Gallery.

I introduce Patricia this way because her work flows naturally in this gallery like blood in the veins of a beating heart.

PK: Cactus Gallery attracts a very eclectic crowd of artists and art lovers, and I’ve been very inspired by this because one of the things that interests me the most, in my art and in life in general, is how distinct we can be from each other and at the same time how connected we can feel regardless of our differences. I think of Cactus as a place which has been able to give me and many other people a sense of belonging without having to blend in; a sort of “we’re all the same because we’re not.”

Patricia grew up in Argentina where she started her visual arts career graduating as a Professor of Painting from the Prilidiano Pueyrredón National School of Fine Arts. She has exhibited throughout South and North America and her paintings, illustrations and music have been published globally.

This Q&A is a portal into the mind of one of the most intriguing artists in the City of Angels.

Art has been a survival tool all my life, and in time it became a conscious form of resistance; my way to counterbalance the many forms of destructing, oppressing, conforming and disconnecting, so predominant in this human-made world.

AB: Your paintings almost always feature women who are strong and beautiful and they seem like they are “alone in a crowd” as if they are different or excluded, or maybe even “banished” from the others. This is, of course, from my perspective. What is your perspective on these women? Why do you paint them in this way?

PK: All my life I’ve felt like the characters I represent. Since very little I felt misunderstood or unable to fit with the crowd or to even understand why things are the way they are and people do the things they do.

The word “normal” is alien to me; I simply do not understand the ways of the world, like when a kid asks “why” all the time and no answer can be satisfactory. I’m naturally shy, and expressing out loud that things don’t make sense is never a popular idea, so I’ve always used my drawings to express my thoughts and feelings.*

Eventually and very slowly I taught myself how to be social to avoid feeling isolated and simply to stop suffering, but art is still the best way for me to say how I feel about the world, also in the hopes that this will resonate with any other person who might feel the same way but cannot
express it.

From a more social point of view, I’ve always been aware that I belong to minorities — I remember one time when I was very young, I was filling out some paperwork and I kept checking in the box that read “other” because none of the preset categories would work to define me. This is something I’ve experienced consistently throughout my life, and it gave title to my series “The Others” where there’s always one character totally out of place.

The system doesn’t contemplate our individuality; it needs to classify and standardize, but we are all special and unique in our own stories. That is why I love faces, because you can recognize one face in a multitude of millions.

I try to use my works not just to express my own feelings, but as an excuse to bring up subjects that can be so uncomfortable that people simply stop to thinking about it. I like using something beautiful or intriguing to introduce an idea, or to start a discussion.

AB: How has living and painting in Los Angeles changed your work as compared to the work you did while living in Argentina?

PK: Strong-willed female characters in a male-made world were already there on the pieces I made while still in Argentina. Having to make a living far from the safety net of family, and being determined to make that living with my art, has pushed me to overcome certain obstacles that perhaps I wouldn’t have had to deal with in the same way had I stayed in my native country. Once I came to the US, uprooting was tough, and the language alone was a big problem for me. And as I could understand pretty much everything but couldn’t speak back, it brought me back to my very shy years.

I felt isolated again, but this situation inspired my first series of paintings here, titled “Lonely”, which I created soon after my arrival. In this series, the image of one character separated from the rest took a stronger form, and also other recurrent images such as characters with roots and characters with wings.

I had the chance to show this series having been in town only a few months, first in what was a very modest newly-born NoHo arts street fair on Lankershim and Magnolia and then at The Hotel Cafe in Hollywood, where I sold my work to two women who became important to me in the following years. One of them started commissioning pieces from me, and allowed me to start sustaining myself partly with my art. The other woman connected me to someone who led me to start working as a book illustrator, which was something I had wanted to do for a long time.

Thanks to my first book project, I came across the material I use for my three-dimensional faces (Paperclay) which became a signature element in my work.

One of the things I realized after having worked as an artist in LA, is that art truly is a universal language, and can connect me to people with whom I wouldn’t be able to communicate in any other way, be it because of language limitations, or simply social differences, or prejudices, or other forms of distance.

AB: Tell me about your process for creating a series from beginning to end.

PK: The main theme usually becomes obvious because it’s something that I’ve had in mind for a while. I tend to have more ideas than I can possibly develop, and some of those keep coming back, so when I need to work on a series there’s usually one or two big ideas already waiting for me to start.

Once I have the theme, I make tiny unintelligible sketches that make no sense to anyone except for me, just to put the ideas out of my head, and to think of sizes, formats, and general composition.

Depending on what I decided to create –paintings, drawings, collages, sculptures– I start organizing which materials I need. For instance, if I’m working with collage like on my latest series, I need to gather all the images: prints, photocopies, book pages, whatever I will use, for each piece. Then, I do a very basic sketch on the canvas or wood, and I glue the papers. Then, I paint, and finally I work on faces and details, a lot of
times with dipping pen and ink.

If I’m working on three-dimensional pieces, I still do pretty much the same: for puppets, I select the fabric that will make the clothing which, often times, defines the palette of the piece; if it’s mixed media objects, I select the machine parts, pieces of wood, etc.

But generally speaking, I like finding things in the process that I didn’t think of before hand, be it something that’s printed on a piece of paper I’m using for the collage, or a way to combine the different elements. It’s a lot like playing. For instance, most times when I work with mixed media, I make a bunch of faces in Paperclay first, not knowing which face will belong to which piece, and then I try them out and switch them and combine them with the other elements to see what surprises me, or what looks best.

AB: What was one of your favorite series you have done and why?

PK: My favorite series so far is Animas in the Matrix. I came across a few broken electronics, and I opened and disassembled them and I felt some of the parts were too beautiful and interesting and I decided to use them.

Certain objects have a beauty and a meaning and a message and I prefer using these elements on my pieces rather than creating an illusion by representing them through painting. So I decided to combine everyday objects with machine parts; there’s a contrast in the elements themselves and a contrast between the characters and their environment.

These are soulful creatures being unique in a machine world. These Animas are technically misfits, but they have found a way, a corner, a space to do their thing even if it’s a tiny one.

I think a lot about words, their meanings and how we use them. I love the word “Anima” because it means “soul” and it’s related to how we feel, like feeling animated; in Spanish it’s also related to gaining courage or refers to our state of mind, and in psychology it’s the true hidden self as opposed to the public persona, or the feminine inner personality unconscious in the male. I remember the feeling I’ve had when I thought of the series; it was the perfect way to combine some of the themes I’d been working on in my paintings, and to take advantage of materials which are so easy to find (and free!) and to recycle them in a system where more things turn obsolete and become garbage, and I could make
puppet-like characters on wall art pieces.

Not surprisingly, this is not my most popular series. My dear Animas, like me, are not completely understood just yet. I will never give up on them, because they make me so happy.

I’m not sure exactly how, but one of these days I will animate my Animas and do videos with them. I love taking on a new challenge instead of staying in the safety of what I already know or master, because having to adapt to something unexpected is the best way to get creative and be resourceful, in art, and in life.

You can enjoy Patricia’s work in these places: 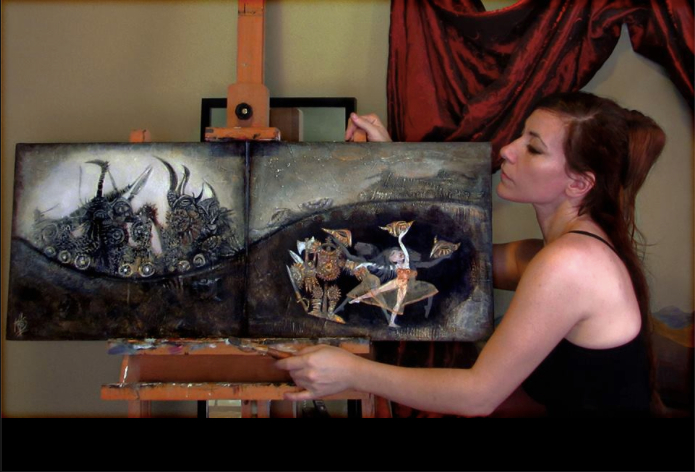