Teale Hatheway’s newest solo exhibition, Fragmented Realities: City of Dreams, communicates her conflicting feelings about Los Angeles and how she’s had to grapple with her love for the city’s rich history despite its ever-changing landscape.

Five generations have passed since Hatheway’s family first came to Los Angeles. Over the years, most have remained because the city always had offered plentiful opportunities for employment along with an abundance of warm weather and reasonable real estate. The incentives that brought Hatheway’s family out west, however, have slowly begun to dissipate due to the rapid influx of development that has made affordable housing nearly obsolete for an underpaid and struggling work force.

In anticipation of her opening, Hatheway took a moment to sit down with We Choose Art to discuss her background, her process, and why the City of Angels remains such a constant in her work.

When did you first develop an interest in fine art?

My mother is a painter and her studio (which was off limits to me as a child) was a treasure chest of everything expressive and good. When I was six or seven, I snuck into her studio while she was out. I got into everything and ended up leaving my fingerprints, smeared in ultramarine oil paint, all over the house. Just after I’d wiped them all up she drove up the drive. That experience left me fascinated by how much trouble a tiny speck of paint could cause. I knew at that moment, without a doubt, that I loved the stuff.

You have a diverse educational background. It appears that your many experiences and areas of expertise contribute to your practice. Can you comment?

There are a few reasons. One is that, when I went to school, I could not or did not know how to find an art education that could teach me specifically how to paint. I eventually learned that many painting programs were hidden in larger illustration programs. But at the time, new media was the rage. Painting was still “dead.”

I also felt it important that I bolster my intellect and obtain a well-rounded education. I turned to history, sociology, architecture, and urban planning. Studying these subjects helped open up my world; I learned how to relate to others and to participate in a conversation that was larger than me.

When did you generate an interest in architecture and urban planning? How have your interests in these areas influenced your work?

I grew up in Pasadena when the preservation, restoration, and development of Old Town was in effect. The transformation made an impression on my young mind. Later, I learned that many cities don’t have community activists to help preserve and protect their history, like Pasadena does. This affected me because I’d developed such a deep connection to the history of my city through my shared experiences of place. Traveling and living abroad also influenced my appreciation for architecture, which I spent years studying in depth.

While you’re described as self-taught in architectonic drawing, have you studied/worked in other genres? If so, what was your experience and how did it contribute to your current practice?

I’ve studied 3D art and figurative painting. In college, I had one particular class in alternative materials that cracked things open for me and pushed me to start experimenting, but I never gave up painting. Ironically, the last figure drawing class that I ever took is what caused me to start focusing on inanimate objects. One day, I’d been so fed up, drawing female curves, that I began drawing the room around the model. I drew other easels, the plinth, everything but the figure. That was a definite sign.

Professionally, I’d worked as a stage tech for a number of years, so I had a lot of knowledge about lighting, rigging, and – most important — how to fill a room. Seeing how pieces of scenery could be moved and arranged to totally transform a space was inspirational. Once I started to approach my paintings as if they were theatrical sets, I started focusing on very specific architectural elements as a way to represent actual places. That’s where the theatricality of my work comes into play.

So, why choose art?

Compulsion. I have to create. While I could do that in any number of ways, putting on the entrepreneurial hat, running my own business, and not having to compromise on my vision seems easier than anything else.

Who are your influences? Has any one person contributed to your pursuit of art-making?

I don’t have many art influences, which is what probably makes my work unusual and my niche elusive. Much of my content comes from sources that aren’t typically affiliated with fine art. I intentionally keep it that way. For me, art is about lifeu, and life must be lived broadly in order for it to be expressed outside of the art vacuum.
That said, I think that Berenice Abbott and Eugene Atget’s photographs convey city life in ways that remain relatable to this day. While I’ve only recently discovered Richard Bunkall, I’m awed by his masterful use of scale, depth, and light in his paintings. Then there’s Sargent, a gold standard painter, though I have no expectation of joining his school. There’s also something about de Kooning. His willingness to let imperfections become perfections has been a valuable lesson for me.

I know that much of your work concentrates on various aspects unique to the city of Los Angeles. Can you talk about your relationship with the city and why you are drawn to various architectural details?

What comprises the buildings that have been imposed upon me? Are they good? Did the builders care about them throughout their construction? Are they better than good? When I ask these types of questions, I become a tourist in my own town and am forced to slow down and take note of the details that I might not have noticed otherwise.

Portraying these details as subjects in my work pushes me to challenge my audience as well as myself. I try to instigate intrigue by using my work to invite viewers to determine whether they can place the location of one of my details. My hope is that they will begin to notice details from my paintings as they travel throughout the city and start to connect with them differently. As for myself, I ask if I can make my details work together in a composition that feels fresh and challenging and fitting to the entirety of the place that I am representing.

You employ a various media and unconventional techniques. Have you always experimented with your materials? Can you talk about your process?

I think my ongoing desire to experiment with new materials helps me fill the gaps in my painting education. I do think that I tend to consider light’s function when I decide what materials I want to use. I like to use India ink on linen (instead of paint on canvas) because it doesn’t produce a reflection. I often use bleach because of its ability to lift color while otherwise leaving the surface unaffected. And while gold is reflective, I use it because it creates a sense of movement while the burning, as a technique, creates a sort of grittiness.

The translucent acrylic sheets that I’ve been using recently have produced an ethereal feel. They are very white and evoke a sort of heavenly purity that almost makes the gold in my work look perfunctory. Lately, I’ve enjoyed working with spray paint and stencils. They’ve given me a new set of parameters, which I’m pushing against. It’s all really challenging work, and the challenge of working with something new always excites me.

Can you discuss your newest body of work, slated to debut at Gallery 825? When did the idea to use streetlamps as a motif for your love of LA first evolve? How did it develop into an installation? What materials did you use to create this body of work?

For Fragmented Realities: City of Dreams, I composed a series of paintings featuring street lights found throughout the city, each of which are framed by maps of Los Angeles’ sprawling highways and punctuated by observation benches. The lights are an old Los Angeles tradition, and I imagine them as Angels, stoically protecting our endless streets, delineating neighborhoods, and watching generations pass.
While my street lamps are intended to stand as celebratory icons for the city I love, these particular works reflect my uncertainty about the future of Los Angeles because it has fast become a destination for wealthy developers from around the world. While it’s great to feel as if I no longer need to defend my home-town because everyone has finally realized that it is a city with so much to offer, at the same time, I’ve had to watch a number of friends struggle with rising rental rates in a city where the job market has become much more competitive.

A cocktail, a few commissions, a few proposals, and a whole lotta’ hustle.

Fragmented Realities: City of Dreams opens Saturday, September 12, at Gallery 825 on La Cienega with an artist’s reception from 6 pm until 9 pm. The exhibition runs through October 9. 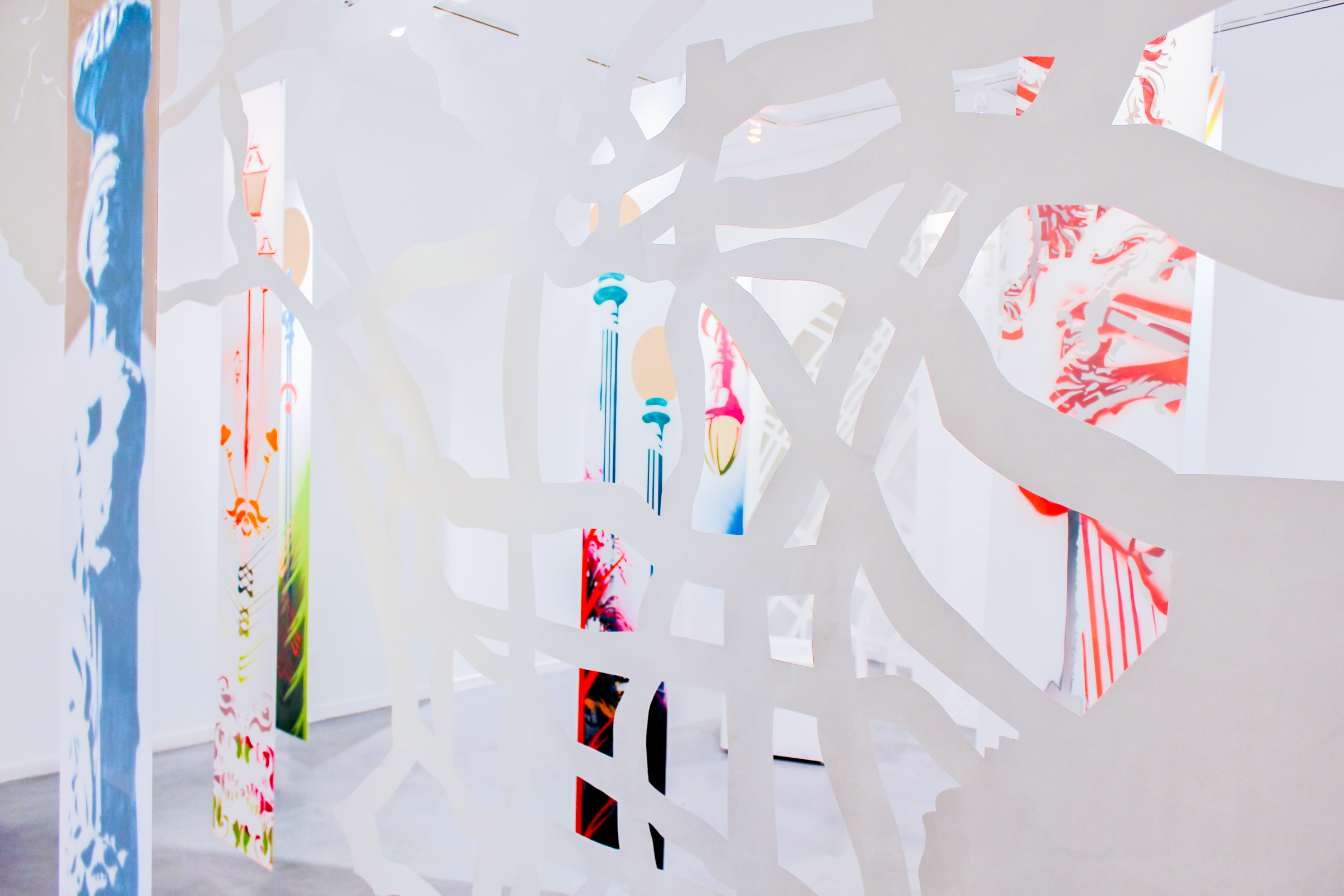 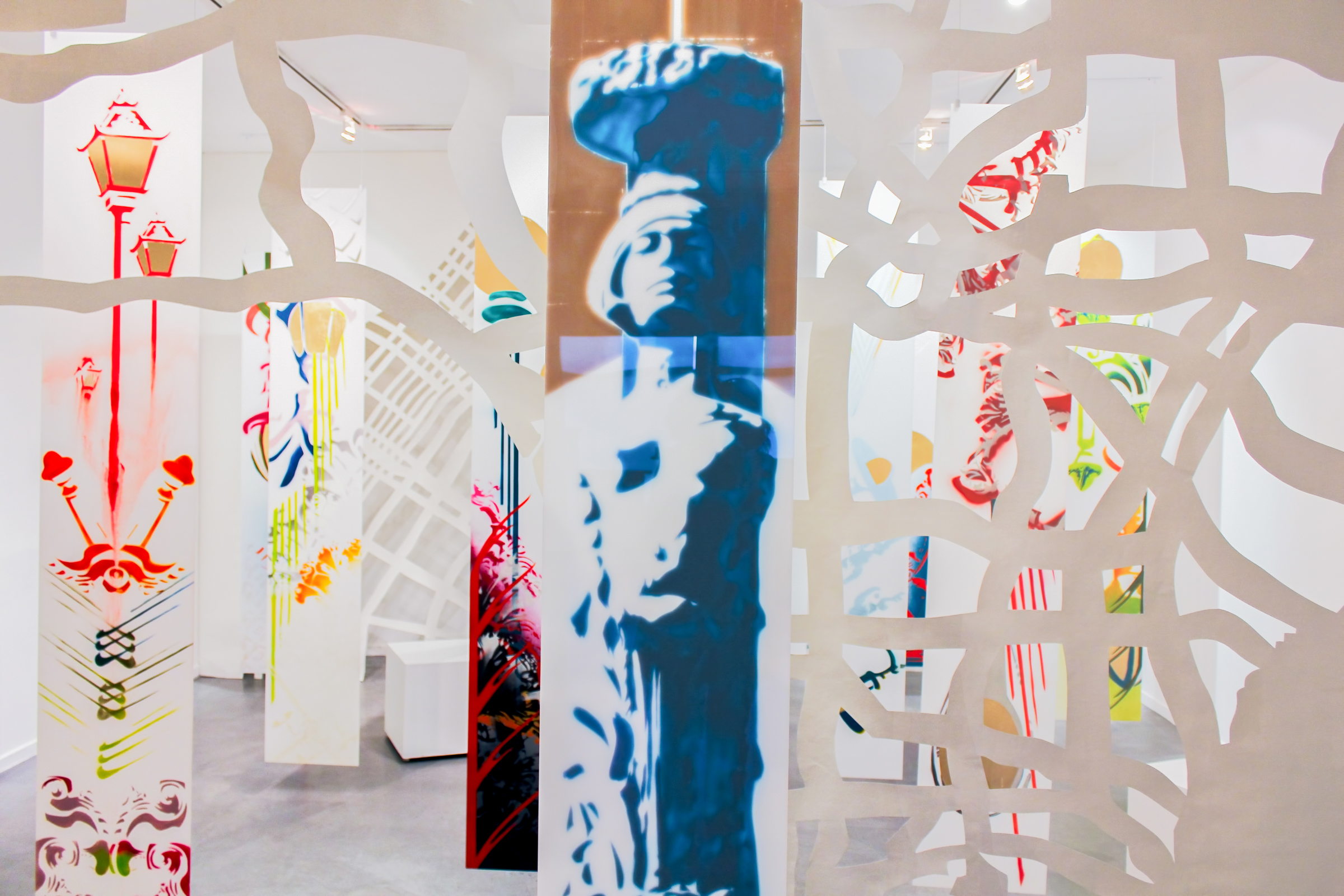 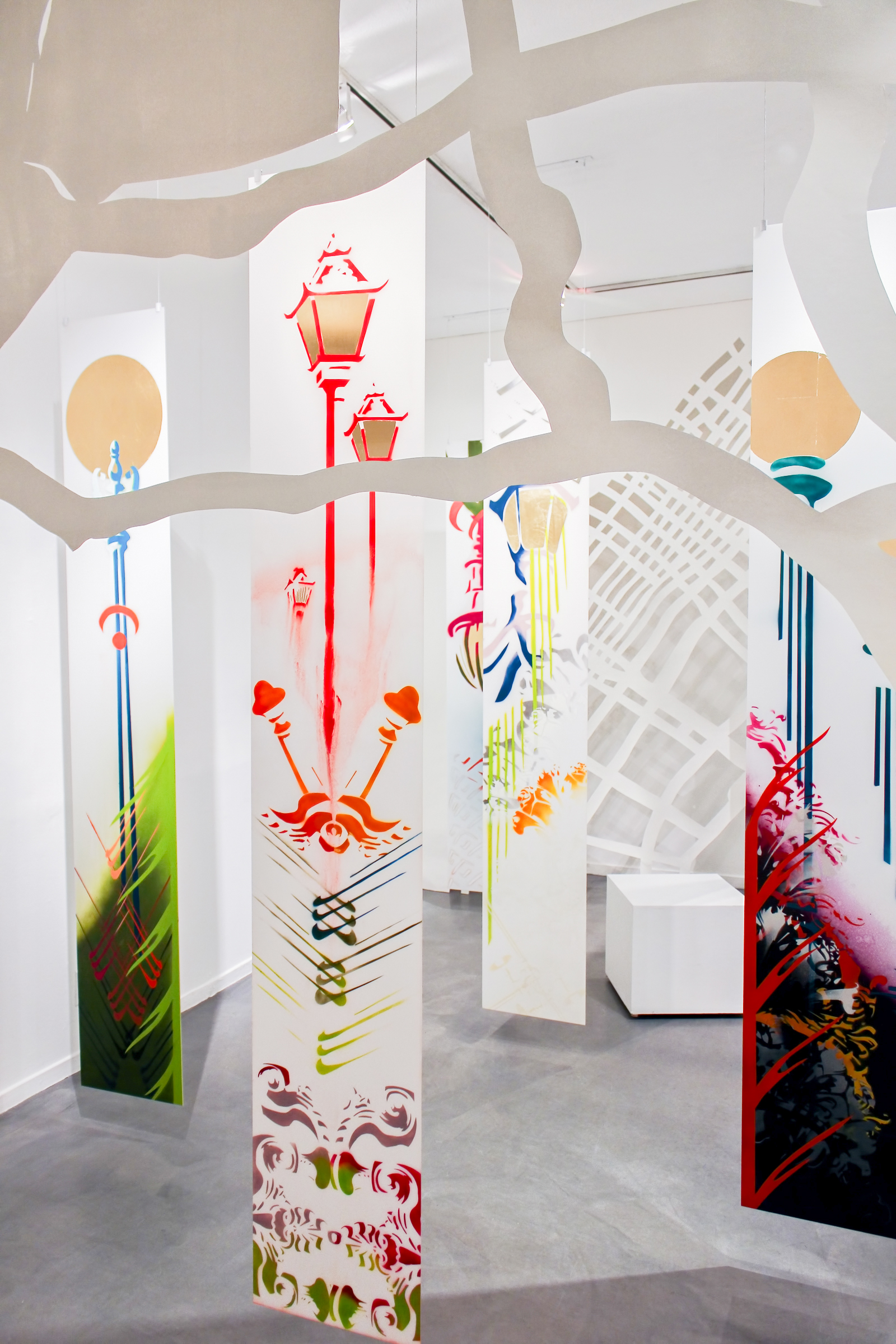 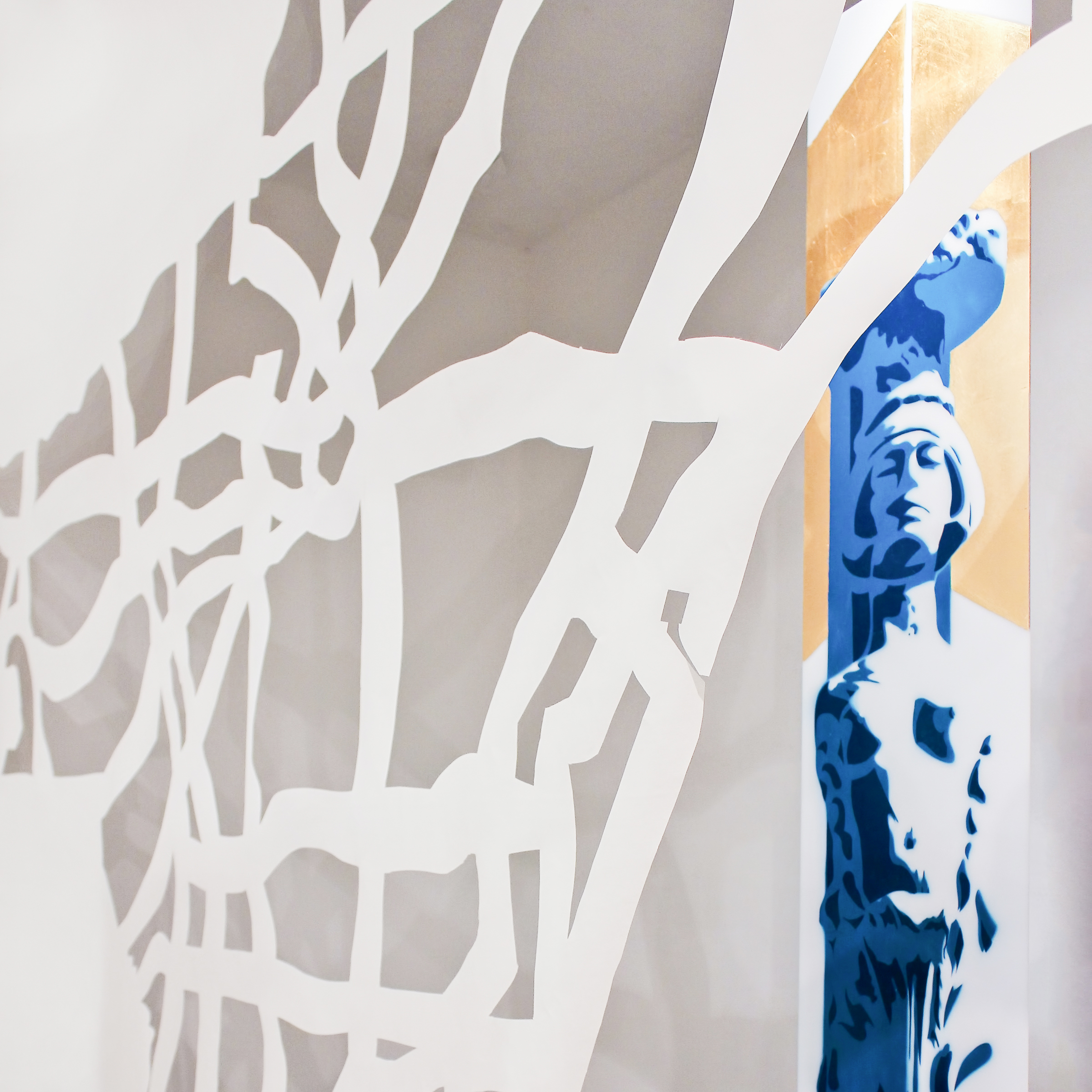 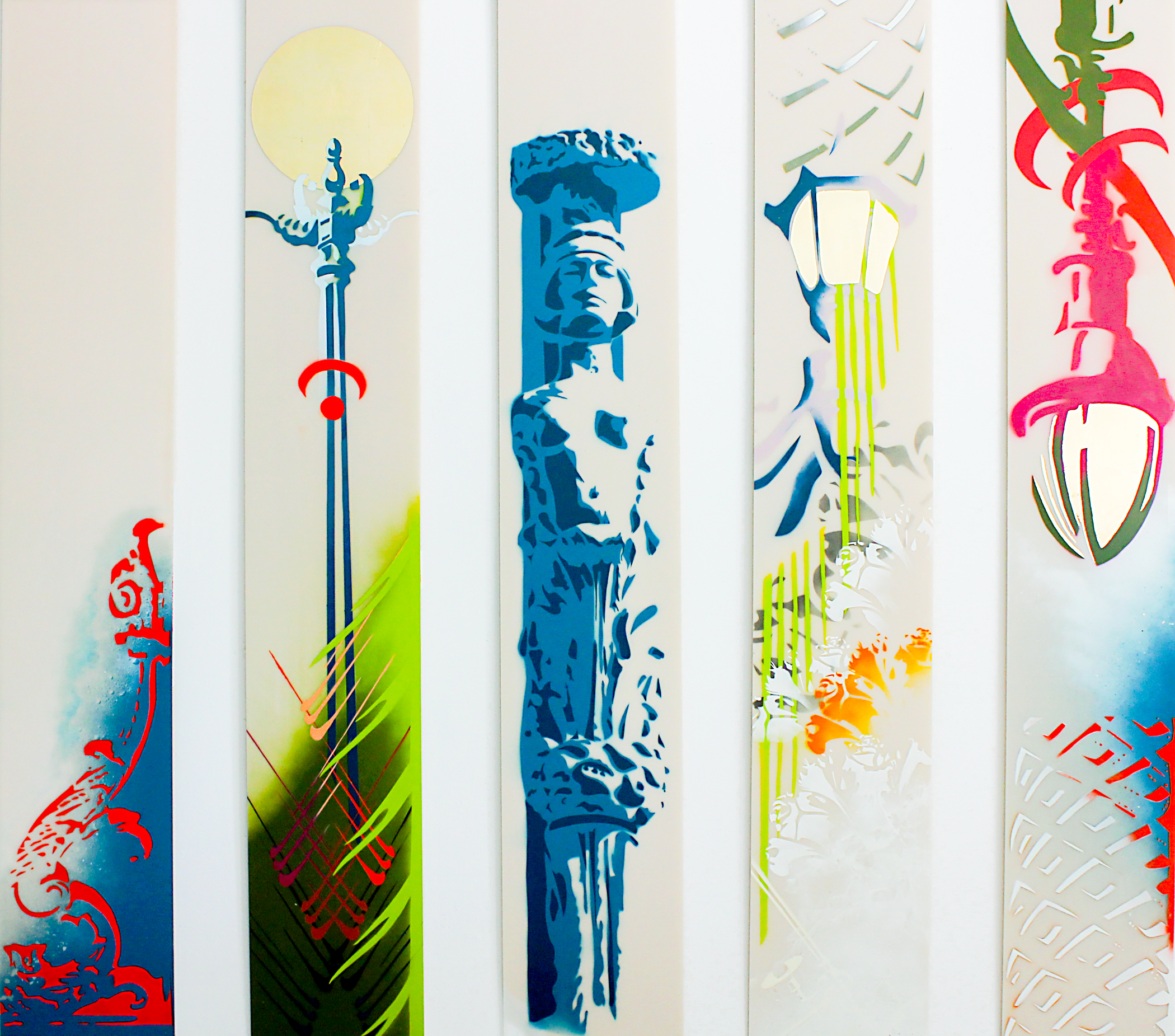 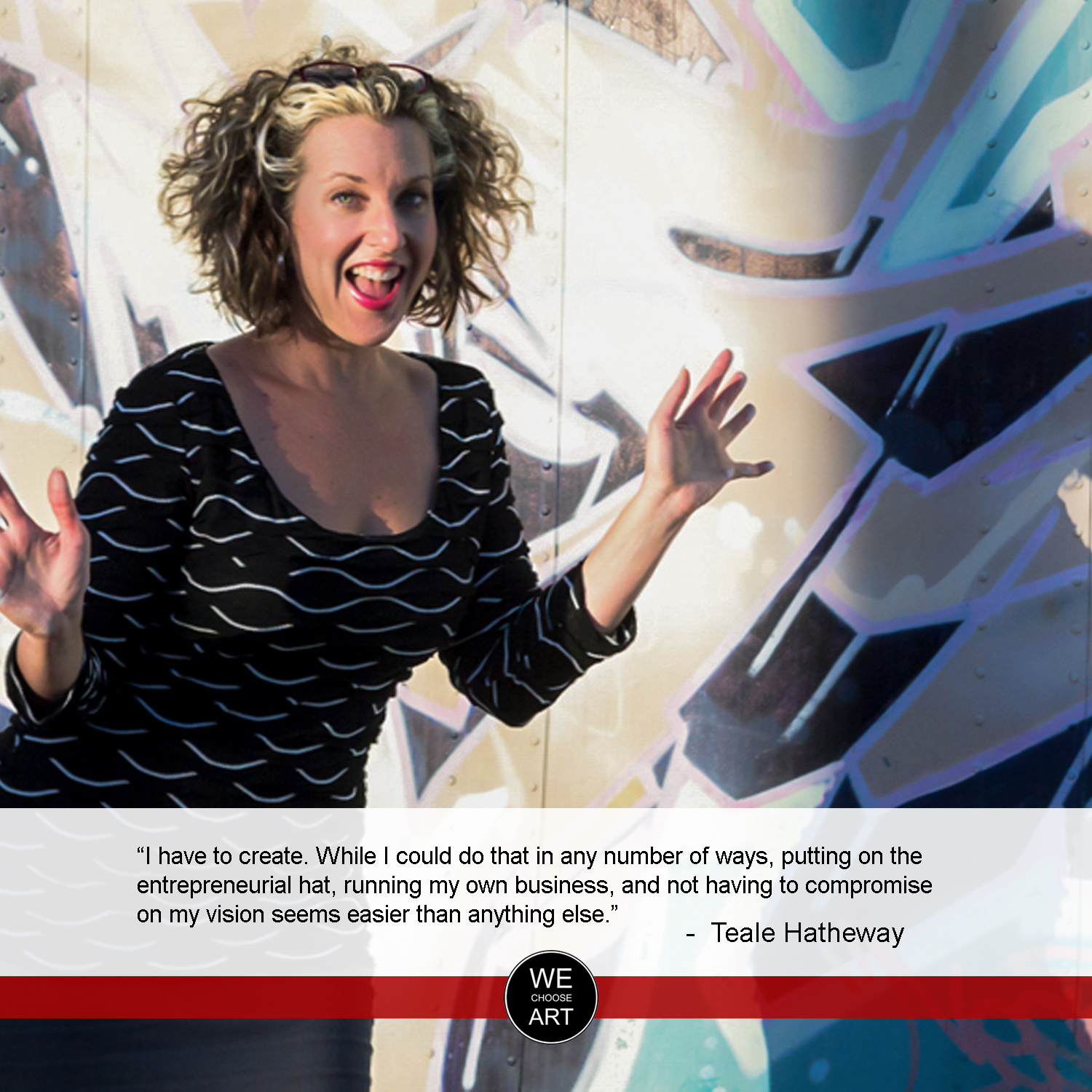